Wasatch Speedgoat- A lesson from the Pain Cave 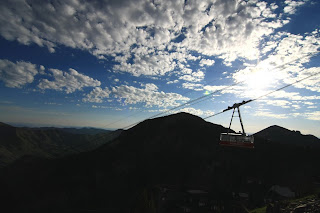 Saturday I toed the line for the Wasatch Speedgoat 50k, the brain child of superstar ultra-runner Karl Metzler. I have an attraction to technical, elevation laden races and with Karl’s claim of the “the toughest 50k in the land”, I expected a fun filled day in the pain cave. The race starts at the tram deck at Snowbird ski area, where I think 126 of us lined up, heard some brief instructions from Karl and then were sent off into the first of many ascents. Right from the start one runner took off at what seemed to be a totally unsustainable pace- it was less then five minutes later I caught and passed the runner, pulling into the lead. Sometimes after lots of training and racing it all falls into place, Saturday was shaping up to be that day for me. I felt outstanding- strong legs, controlled breathing, quick pace- it was starting out as one of the best runs I had ever had. After the first climb-descent-climb combination I ran into a speed bump in the form of a moose w/a small calf. Immediately my mind shot to the mental picture of Karl getting chased at Hardrock and I stopped dead in my tracks. I yelled, waved my arms and did all I could to try to get her moving, but all she did was look annoyed. Within a minute or so Christian caught up to me and together we were able to scare her off… frustrated that I had lost the lead I had built I pushed the pace a little to try to get it back, Christian had been training for Hardrock and was FIT! He was on the waiting list and unfortunately didn’t get in , but he was clearly ready for this race. It took a while but I eventually I pulled away and put some distance between us. I pulled pretty hard the rest of the way up the climb to the top of the tram, hit the aid station, and hammered on towards the climb over Baldy. 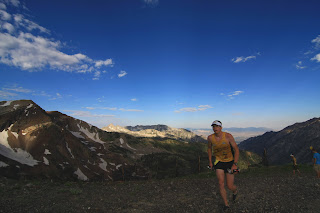 At this point I was feeling awesome, moving quickly I continued to distance myself from the crowd over Baldy and down towards Mineral Basin, the flags were set clearly but I thought I had read that the course went over the front so I delayed a minute until I could see Christian make the turn as well, to which I promptly charged towards Larry’s aid station at the bottom of Mineral Basin.

I hit the aid station, asked for a bottle refill and was told, ” go down the road a little ways and turn right”, cool I thought let’s make this lead bigger, I hit the split button on my watch and I turned it up, striding out down the road, I noticed that the strap on my handheld had come undone when it was filled and fiddled with it to get it re-threaded and then opened it up down the road. After a few minutes of running I started to notice that I hadn’t seen a marker in a while and got a BAD feeling, I ran a little further-still nothing then I came across a mess of intersections all unmarked, panic set in, I tried right- it looped right back to where I was-CRAP I missed the turn, I turned around started up the hill only to see Christian coming at me, he was having the same bad feeling and we turned around climbing back towards the aid station. Well about 30 feet from the aid station was the right turn we had missed, I hit the split on my watch it read 18:30- we lost nearly 20 minutes and now I was in around 11th. While fiddling with my handheld I had ran right passed the well marked corner, Christian had dropped a bottle about the same spot and must have done the same.
As you might expect I was mad, mostly at my self for not seeing the corner, I tried not to dwell on it, and put my focus into catching Eric Storheim who was now in the lead. I passed several runners on the climb up sinners pass, and several more on the descent into Mary Ellen Gulch, by the time I hit the double track I was back into third and running hard. I passed Krissy Moehl, who was checking course markers- she told me to “run smart” which actually made me reflect for a second on the pace I was pushing to catch up- I backed off just a little. I rolled into Roch Horton’s aid station where Eric and Jay were still fueling up. Roch sprayed me down with cold water and scolded me for not drinking enough out of my bottle’s- he was right I had been so focused on catching up I was blowing eating and drinking. I drank some red bull cola, got sprayed again and headed out about 2 min behind the leaders. I knew a big climb was coming and put the mantra of “come on back to me” in my mind. It took a mile or so but I eventually reeled them in, and chose to hang with them for a bit to recover from the effort I had just put in to catch up.
When I figured we were pretty close to the top I made a move to pull into the lead, Eric and Jay dropped in right behind me, we passed Krissy again, just before the top, as we started down the hill I remembered Krissy’s advice from the Pocatello 50-“Just let it roll on the downhill”, which I did, I pulled into Larry’s aid station in the lead, but barely, I grabbed an S-cap and glass of water and headed out right behind Eric who didn’t stop at the aid at all. About 100 feet from the aid station the wheels came off my bus, I got really hot, dizzy, and began to have tunnel vision. I stopped running and started walking slowly-I was in trouble. Jay zipped by and I got cozy deep in the pain cave. 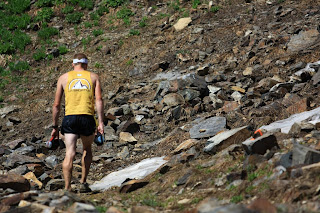 Digging deep in the dark part of the pain cave- Photo Greg Norrander
All I could muster out on the climb out of Mineral towards the tunnel was a walk-a slow walk in the park kind of walk. The perfect race was over. I had pushed too hard to catch up and was paying the price. I got to the tunnel aid station had some more coke and hopped into the tunnel-it was cool in there and was a great relief from the heat, I kind of just wanted to lay down in the tunnel where it was cold, but embraced the dark end of the pain cave and started digging to see if I could reel the leaders back in. I let the next descent roll, and hit the climb up the ridge under the tram feeling better- not great but better. 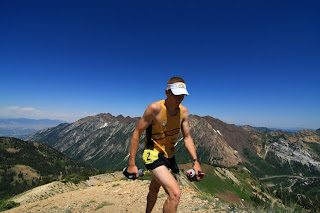 Near the top of the second to last climb-Photo Greg Norrander
I put that climb behind me, descended into little cloud bowl(?) and started up the snow. I was getting real hot again so I stuffed my shorts w/snow and packed handfuls into my armpits to try to cool down, it worked and also kept me moving. Just pass the top of the snow Jay and Eric passed me on their way down a solid 15-20 minutes ahead of where I was. I put my head down and once again started digging in the pain cave. I got some words of encouragement at the top from Jared Campbell, Missy Berkel, and Sarah and Sterling Acree as I turned down the final descent. I pushed with all that I had left down the descent but was unable to catch Eric who finished 1st and Jay 2nd, I finished in 3rd, and after all was said and done was very happy with my effort and how the day ended up.
A few thoughts on the Speedgoat- Karl is sick, he managed to squeeze in 10,748′ of gain and the same loss in the course, just when you thought you were done climbing, he sent you down and up again to make sure you were getting your money’s worth. Moral of the story, don’t get off course, it nearly guarantees a visit to the deep recesses of the pain cave. I loved the race- for some reason I enjoy a good suffer, it really makes you feel complete when you have to push harder than you think you might be able. Can’t wait for next year’s race-hopefully no scenic detours next time!
Full Results Here
Great Pics by Jared Campbell and Greg Norrander