First I have to apologize for the blog silence, since school broke for summer (10 days) I have been away from my computer and technology in general at my parents house in Northern New Mexico, I have a lot of pictures and video to post on that later. First things first though- yesterday’s race in Park City- the Jupiter Peak Steeplechase. This race is part of the La Sportiva Mountain Cup, and because of that it is a big deal. I had the awesome opporunity to meet some of my Sportiva Team mates- Jason Bryant, Megan Kimmel, Catilin Smith, and Bernie Boetcher plus two other that I already knew- Brad Mitchell and Karl Metzler. Apart from the large number of La Sportiva athletes there were also a lot of other sponsored runners from all over the US.

Ok, there were a lot of big names at the race, “stop freaking out” I told myself, but it wasn’t easy, I look up soo much to a lot of these runners and I felt like just walking around with my mouth gaping wide open asking for autographs or something. Also given the concentration of talent I knew that the race was going to be tough, lots of very strong runners. The course itself was right up my alley, it had 3307′ of elevation gain/loss in 16 miles, the first half up and the second half down. I enjoy running uphill, I tend to be pretty good at it especially if it is technical, the only downfall to the race is the downhill, I don’t love to run down but was hoping to hold my own. 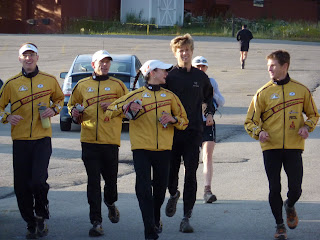 Warming Up with La Sportiva Team mates– Photo Tanae Nelson
I warmed up with a Jason, Caitlin, Brad, Bryon Powell (irunfar.com), and Shiloh Meilke (Vasque). It was cool to be with lots of other people in yellow. After about 15 minutes of warming up I stripped down to the Sugoi La Sportiva Race singlet, Sugoi 42 k shorts and grabbed my Ultimate Direction hand bottle filled with EFS and headed to the starting line.
The race started at a reasonable pace with a lead pack somewhat quickly separating from the rest, as the climb continued the pack kind of exploded with a couple of runners pulling away and the rest of us stringing out behind them. I held about 6th until Bernie Boetcher fellow Sportiva runner hammered by about 1/2 up the climb. Just before the top on the very steep scramble section I passed one runner, who mumbled something about this being a “running race” as we power hiked up the steep section, I pulled back into 6th, but knew it probably wouldn’t last because of my marginal descending skills. I have found through this summer of racing that I am much better and enjoy ascending quiet a bit more than it’s downhill counterpart. I ran past the false summit and the real summit still in 6th and started the descent, the course wasn’t marked really well at this point and I held back a little to make sure I wasn’t pulling a repeat of the Speedgoat by getting off course. As soon as I spotted the runner I passed on the last ascent headed the same way I was I turned it up hoping to hold him off at least for a while. I wasn’t able to hold him off too long and he passed me going very fast.
After seeing all of the runners at the start I told myself ” make sure you finish top ten”, I figured that was a pretty reasonable goal, and when I was passed I fell into 7th and felt a little discouraged it didn’t leave a lot of room for error. I poured down the hills as fast as I could, but to no avail was passed again, this time by Jon Allen from Logan who is a very talented runner. Okay I said to myself that is it, it is time to hurt and hold 8th. I shifted gears, to a somewhat painful pace and pushed with all my tired legs could do, near the end we turned on to the Spiro trail which has lots of switchbacks and out of the corner of my eye I spotted Brad Mitchell creeping up on me, I opened it up as much as a I could knowing it wasn’t far to the finish. I managed to hold him and finished 8th overall in 2:03:01, Brad finished 12 seconds behind me, if he had a little more distance he would have caught me for sure. 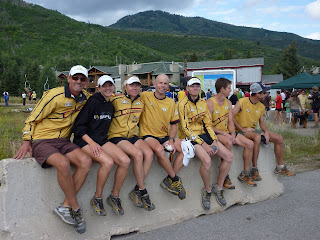 The La Sportiva Mountain Running Team- Photo Tanae Nelson
Considering all of the running and road biking I did during my vacation last week, I was very happy with my overall time and effort. The field was very deep, deeper than any other race I have done this year and I feel like 8th was pretty solid. I also had the great opportunity to cool down with the other runners on the La Sportiva Team, getting to know the people you admire as runners is pretty awesome! I am trying to get a post put together of the runs I did in New Mexico while on vacation, including some pics and video from the new flip camera we just bought. Check back soon! Also check out El Vaquero Loco 50k- my wife and I will both be headed to Star Valley Wyoming to race in that this weekend to celebrate her 29th birthday. She will be running the 25 k her furthest distance yet- she is going to do great!