Bear 100 Gear and update since race

Well it is about time that I get around to posting what I said I would in the Bear report. If you want to go straight to the gear scroll past this paragraph, otherwise I’d like to take a second to fill you all in on what has been going on since the Bear. I went back to work/school at the Midtown clinic in Ogden where I am doing my second rotation for PA school on Monday. Interestingly enough I saw several patients on Monday, Tuesday and Wednesday that were diagnosed with the infamous H1N1 flu. I was starting to feel pretty good, the soreness was almost gone, the one blister I had during the race was nearly healed, a couple ugly toenails had fallen off, when on Wednesday night after work I started to cough… well I got sick, Thursday I woke up with a fever of 103, that climbed to 104 accompanied with vomiting. By 6:00 that night I was on my deathbed, and the wonderful Hall family that I am staying with took me to the Emergency room , where they gave my IV fluids, anti-emetics, pain killers, and anti- fever drugs. A couple of hours and a couple of liters of fluid later I felt a lot better. Sadly the sickness overcame the meds and Friday night I ended up back in the ER for another round of fluids, my blood tests from the day before came back and my flu test which was positive for H1N1, thanks patients at Midtown! My wonderful wife met me at the hospital on Friday night and took me to her cousins house outside of Park City and she nursed me back to health over the weekend. I stayed at the cousins until Wednesday when I felt I had enough strength to go back to the clinic for a half day. During the flu I lost 15 lbs and was lighter than when I started High School, I was pretty weak, but gratefully I was on the mend. I went for a very easy run on Thursday night just to stretch my legs, it didn’t feel very good at all like I had hoped that it would. Last weekend I went back to Pocatello and being at home for the first time in 3 weeks was what I needed to get things back together, I went for a 3 hour mountain bike ride on Saturday, got plenty of rest and came back to Ogden Monday for another week at the clinic. This week I got out twice on my bike and tonight went for an hour long run on the Shoreline trail and up Taylor Canyon, I finally felt like a runner again, and man it is good to be on the run!

So after the update here is the gear list from the Bear 100 (with hyperlinks if you want more info on the gear):
Shoes: La Sportiva Fireblade
Socks: Defeet Trail 19 (2 pairs)
Clothes: Sugui 42k split short, La Sportiva Race Singlet and Tee shirt (both sugoi brand), Sugoi Icon armwarmers, La Sportiva team jacket by Sugoi as well.
Hydration: Ultimate Direction Fast Draw extreme hand bottles (4-my crew would have two ready for me at each aid station). During the night I used the Ultimate Direction Wasp pack.
Headlamp: Special make-up Ultrarunning Black Diamond Icon– Thanks Roch! In the morning I used a Black Diamond Ion so I would run slower and could stow it easily once it got light.
To Drink: I used Nuun in both hand bottles all day and at the aid stations at night. I used a lot of different flavors but prefered the Orange Ginger and Kona Cola (on the rocks is the best thing ever!). I also had a couple of Red Bulls, and 2 ensure protein drinks.
Food: I ate mostly gels for the first 60 miles, I had 1 flask of First Endurance EFS Liquid shot, and the entire flavor rainbow of Gu (37 of them throughout the race). During the night I sucked down another EFS flask. I also ate 6 or so Turkey avocado sliders, lots of orange slices, chicken noodle soup, one potato, some very smoked lentils (I ate them in the middle of the night, they had been cooked over the fire and you could taste the smoke), and two bottles of First Endurance Ultragen Recovery drink at the finish. In addition to food I also took about 12 Sportiene chews that were recommended by ultra-running super star Krissy Moehl, it is a type
of herbal anti-inflammatory (no ibuprofen induced kidney failure for me!) it really seemed to help keep the edge off of pain during the race.
Music: ipod shuffle from mile 19 to 60 (ironically I grabbed my wife’s without noticing and listened to a little more pop than I would have preferred), once I picked up my pack at Beaver Ski area I switched to Ipod Nano with a pretty heavy metal mix that I used off and on to help fire me up to push hard in the last 25 miles.
Pacers: The Legendary Ryan Mcdermott, and “Fast” Evan Honeyfield.
Crew: My outstanding Parents, Steve and Diane Nelson, for the whole race, my brother in law Casey during the afternoon, my lovely wife Tanae for the evening and night section, and my beautiful daughter Brynlee for 3 aid stations in the evening. 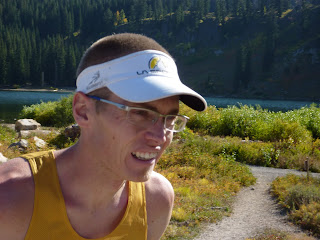 The look I made after running a 50 mile Pr and realizing I still had 50 more to go!
I really can’t believe the logistics that it took me to get everything ready for this race, if you have any questions about the gear that I used or if you would like me to do a full on review of any of it just drop a comment and I’ll get you all the info I can. I am just finishing gathering pictures of the race and should post a bunch the first part of next week. Thanks for reading!