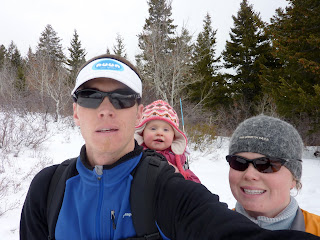 Another month has pretty much flown by, I am not updating as much as regularly as I had hoped for this year. Something to work on for sure. This post is going to be somewhat of a hodge-podge because there are a lot of things that have happened in the last couple of weeks that I need to report on.

First something that is coming up this weekend. One of my favorite events of the year is coming up this Sunday, the Matt Barrett Memorial Telemark Festival and Randonee Race. I am not much of a Teleskier but I thoroughly enjoy a good ski mountaineering race beat down. The race this year will have a long course option that hasn’t existed in the past. The course will roughly have 3000′ of climbing and 3000′ of descent. It will travel over groomed, untracked, off-piste and will have a brutal boot pack to really make your lungs scream. Please tell anyone you think that might be interested, we need good attendance so we can continue to have this event in the future. For those a little less adventurous there will be a short course option about 1200′ less climbing/descent on mostly groomed runs. Cost is $25 and race starts promptly at 8:00. 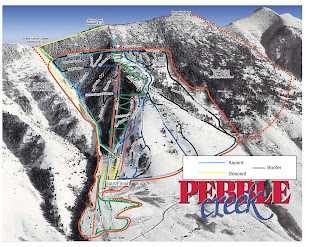 Red Hot 50k
A couple of weeks ago I made the trek down to Moab, Utah for my first race of the year. As I rode down with my good frien Ryan Mcdermott, I realized with each passing mile that it wasn’t going to be the race that I had hoped for. I wanted to go down south to get a nice warm run on dirt. Well there was snow all the way to Moab, and the thermometer in the car never topped higher than 35 and that was in Salt Lake when we left. We has dinner that night at Eddie Mcstiffs with Karl and Cheryl Meltzer, Matt Hart, Jared Campbell and Mindy Knoles. We got to enjoy each others company for quite a while because our waiter forgot to put our order in the system and he didn’t even offer a discount even though we waited over 2 hours for our food.
The race itself started cold 16 degrees. There was some confusion when the gun (yell) went off because we weren’t sure if it was the real one or not. The pace from the start was brisk but manageable on the snow covered road. There were areas of the trail that had snow a little over knee deep which slowed the pace and increased the difficulty. When the 50k course joined up the the 33k course things dried out and the pace again picked up. At this point I had fallen off the lead pack was getting caught by some of the racers that were smarter from the start, including Ty Draney. We finally started climbing again which permitted me to start pulling away again as I am a much stronger climber than flat runner. When I hit the top of Golden Spike I was starting to slip into the cave, so I stopped filled my one hand bottle and then took off again. Shortly there after I got caught by Anita Ortiz, I tried my best to hang on to here but my legs couldn’t do it and the extra effort put me deep in the cave. Ty Draney caught me again and proded me to go with him but I just didn’t have it and watched him go. I hit two gels in a row and finished my water figuring the aid station should be pretty close. I then got some bad news, the aid station was two miles further away than planned because the jeeps couldn’t get in as far as they thought, luckily there was still lots of snow in the vicinity so I started eating as much as I could. After about 15 minutes I started to come around and set my sites on hammering to the finish. I finished in 4:53:00 in 9th which is a 50k PR for me. I was glad I hadn’t gone with Ty because he got off course and ended up finishing 11th about 7 minutes behind me. I convinced Matt Hart after the finish to go soak legs in the Colorado river (which had snow on the banks and ice floating down it. He manned up and soaked for about 5 minutes I could only manage about 2 minutes. Ryan had a rough race, finishing a couple of hours after me. Shortly after he finished we hopped in the car and drove to SLC, I then got in my car and drove to Pocatello. I got home around 1:00 am, the next morning I had to go to Pebble to ski patrol, which was pretty rough since I was probably undertrained for the race. It took a couple of days for my legs to come around but all in all I was pretty happy with where I was fitness wise, it also jumped started my training helping to spur motivation to train harder.

I am going to finish off this post with a bit of sad news. Last Sunday a good friend and amazing athlete Wray Landon was killed in an avalanche while skiing the South Teton. Big Wray was an outstanding guy that always managed to to work me over whenever we met up for a run or a race. He never boasted about his accomplishments even though he was phenomenol at nearly everything her did. Wray I’ll miss you man! Steve Romeo did a great write up and report on Big Wray over at Tetonat.com (Click Here for the link) 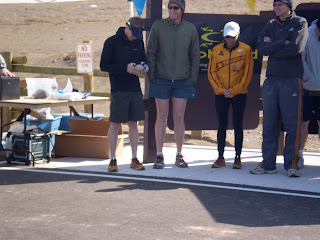 Wray and I on the Podium after Menan Butte Challenge 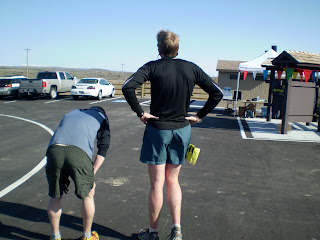 Wray and I enjoying the beat-down together