My Running Tour of Idaho

Well in typical fashion I am way behind in updating this blog. I am working on a post about my trip to Peru, but since I still have a lot to write about I am posting this in the interim. This past week I had the opportunity to go to Sun Valley for the Idaho Academy of Physician Assistants annual conference. I decided to take advantage of the trip so I left my rotation a couple hours early so I could get in some quality runs in on the way.

First stop was in the middle of the desert, the Big Southern Butte. Having grown up in Blackfoot, Idaho the Big Southern was something that has dominated the horizon for a good portion of my life, but I have never been out to or up it. After a couple of quick calls on the way out of town I got decent directions on how to access it and some beta about the route itself. Getting there does require traveling very close to the highly secure Idaho National Lab, but even with its proximity to the lab there weren’t any guards in Humvees chasing me down while I past by. I parked at the French Cabin and ran the summit road from there. There was a lot of snow on the road but it was pretty frozen which made travel pretty easy with the exception of the occasional surprise of a hip deep post hole step. The view from the abandoned fire lookout on the top is absolutely amazing and something that should not be missed. All in all round trip is 10 miles with 2700′ of gain. 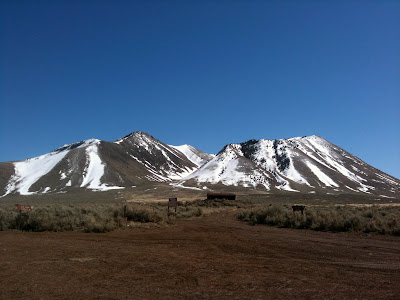 View from where I parked the car, the route goes up the middle and wraps up to the left to the summit that is out of sight in this photo.
I hopped back in the car, drove to just outside of Arco, Idaho and then ran up another area that I had driven by but never been to. Just behind the town of Arco is a dramatic ridge line that has a whole lot of graffiti on it. I ran another 10 miles with 2800′ of gain to access a high point then doubled back. The trails covered some amazing terrain that I really wished I had taken the camera for, but that just means that I have to go back again! After the run I jumped in the car and finished the drive to Sun Valley arriving just after dark in time to participate in the pre-conference festivities.
I snuck in an early morning run before the conference on Thursday and then met Hank Dart, Brad Mitchell (teammate on the La Sportiva Team) and a whole crew of other Sun Valley runners at the track in Hailey for “speed work”. I had never done a track workout before and although running in circles felt strange I ended up getting a great workout that I would pay for the rest of the weekend. Friday I met Brad Mitchell over lunch to put down the Elkhorn Loop (?) a solid 8 miles in under an hour, Brad went back to work and I tacked on a few extra miles to get closer to the mileage goals of the week. I hurried back to make it to the afternoon classes of the conference while stuffing in some delicious calories (in form of a wrap from Wrapcity in Ketchum) in as fast as I could.
With the conference coming to a close the festivities made it hard to get much sleep that night and although I really needed it, I ended up only sleeping a few hours before I got up to meet Hank, Brad, and AJW for some morning laps on their beloved Carbonate before the final session of the conference. Pictured below, Carbonate is a wonderful ridge line near Hailey that is the host to the only available dirt to be ran in the valley. Starved after a long snowy winter these Sun Valley super stars run laps on Carbo to get miles and vertical on dirt. I indulged in a humble two laps that morning because of time constraints but, AJW had plans of four! Each lap is just over five miles with about 1300′ of gain each lap. It is an awesome run! I am very grateful for Brad, Hank, and AJW’s hospitality in letting me tag along for some great workouts while I was in town. 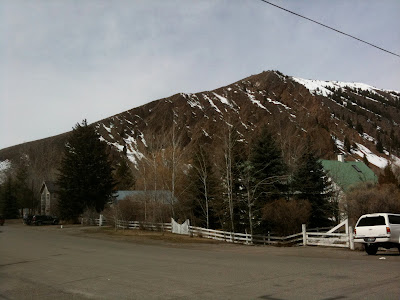 Carbonate Ridge as seen from Hailey, the trail climbs from the left to the windsock/pole about where the snow starts on the ridgeline.
I made it back to the conference just in time to catch some amazing lectures on orthopedic injuries and bring the IAPA conference to a close. I had planned to meet my friend Andy in Twin Falls to get in some running in the South Hills that he has been telling me about, but he had a change in plans and wasn’t going to be able to make it. Still short on my weekly mileage goals I decided to try to give it a go with out a local trail guide. I drove to Twin without telling Andy I planned on going anyways, I had stopped in Hansen to get gas in my car and while I was pumping a very familiar looking Subaru pulled into the gas station. It was Andy whose change of plans had changed and he was on his way out to get in a mountain bike ride. We were both pretty surprised to see each other and he agreed to show me where to start to get a run in. Well it turns out that with the mix of ascent and descent that the trails in the South Hills of Twin it is a pretty good match for a biker and runner to travel together. We took turns beating on each other for about 18 miles of killer dry single track. I got back to the car with that great feeling of being totally worked!
By the end of my tour of running I was pretty tired but extremely pleased with the things I had been able to see and to experience, as well as being in some pretty amazing company while doing so. I can’t wait to get out and visit some of those areas again and look forward to more “running tours” of Idaho and beyond!