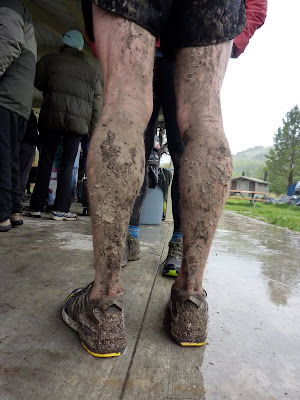 My legs after 34 Miles of awesomeness at the finish area of the 2010 Pocatello 50. Photo by Tanae Nelson

Well it would be a gross understatement to stay that this year’s Pocatello 50 was a difficult run. As many have already reported the race was called off early because of arctic weather conditions including rain, snow, sleet, gusting winds (some estimated 40-50 mph), and very poor visibility on the high mountain ridges (of which this race has many). The start of the race was some of the most pleasant weather of the run, about 35 degrees with a very light drizzle. After the short section of pavement from the start to the Slate mountain trail the lead pack formed, Brad Mitchell and another relay runner were putting down a blistering pace and before the top of the first climb (about 3 miles into the race) they were out of sight not to be seen again. Joe Grant and Scott Jaime were right on my heels and commented that I would be their tour guide for the day to keep them on track. At this point in the race it started to rain a little harder and the trails quickly got greasier and greasier, by the time we descended dry creek towards the Gibson Jack Aid Station it was downright difficult to stay on your feet, the once pristine ribbon of smooth single track became a virtually frictionless slice of slimy mud.