For many years I attended several trade shows a year when I was working as a buyer for an Scotts Ski and Sports, a specialty outdoor retailer in Pocatello, Idaho. That kind of event gets into your blood. When I decided to go back to school for to become a PA I wasn’t able to attend for a couple of years. This year I was able to get down to SLC, not as a buyer, but as an athlete ambassador for La Sportiva and Nuun. I was invited by Trail Runner Magazine to participate in the Uphill Challenge. Apart from the Challenge I was able to check out what La Sportiva has coming down the pipe for next spring, catch up with a lot of friends who work in the industry, and see other friends who had come as athletes. One highlight for me came when I has hanging out with Krissy Moehl and she introduced me to Kelly Cordes. Kelly is a Patagonia Alpine Climbing Ambassador and has been a hero of mine for quite some time. Turns out he is a really cool guy and super friendly!
The Uphill Challenge is a timed event where two athletes hop on a treadmill, side by side, set at 10% incline and they have 15 minutes to go as far as possible by controlling their own speed. In short it is 15 minutes deep in the back of the pain cave. I had done this event a few years ago as a retailer and faired pretty good but this time would be different. Several top ultra and mountain runners were signed up for their 15 minutes of fun, including some of the people I admire and look up to most in the sport- Krissy Moehl, Roch Horton, Anton Krupicka, Scott Jurek, Ricky Gates and Max King to name a few.
I was assigned a time fairly late in the day which gives you the advantage of knowing what you are up against but the disadvantage of waiting and watching people throw down. When my turn came around I was paired with Dan Dehlin who runs for Vasque and was putting the final touches on his prep for the Leadville 100. We were actually very well matched and pushed each other very hard from the start. When the “dust” settled and the blurry vision went away I had covered 1.99 miles, at the time putting me in 2nd place. The last two competitors of the day were Ricky Gates and Max King, two of the strongest trail runners in the US. They both went super hard and finished ahead of me, but not too far. I finished 4th overall, and was super stoked about the results, even though it is only a short 15 minutes on a dreadmill, it helped me to feel pretty good about my current fitness. I took a picture of the results if you are interested to see how some of the superstars of trail running did, and if you want to test yourself go find a treadmill, set it at 10%, set a stop watch for 15 minutes and see what you can do! 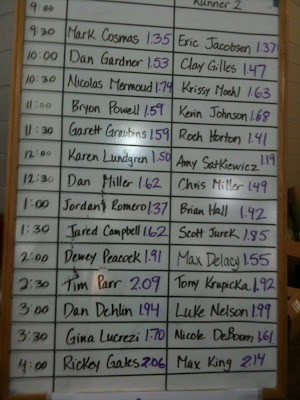