Let me start this post by saying that El Vaquero Loco is still my favorite Ultra that I have run to date. It is an event that our family looks forward to all year long, and this year we got to enjoy it even more than normal because a bunch of our friends from Pocatello joined us for the race this year. We went to Star Valley early the day before the race to make sure we could get a good campsite and the Start/Finish. By the time night fell we were surrounded by many of friends and families enjoying a wonderful summer night in the mountains together. There was a pack of little girls running around getting into things and having a ton of fun while the rest of us took it easy and got prepped for the race the next morning. After roasting marshmallows with the kids and eating enough s’mores to get a solid sugar buzz I went to bed to try to sleep a bit before the race. 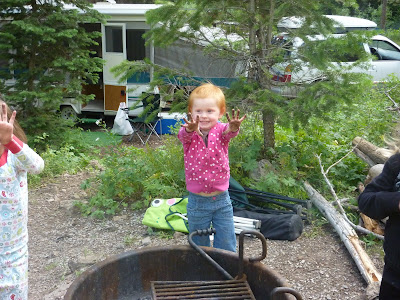 the girls having too much fun
Race morning came early but I felt ready to get after it, although it was a bit cool it was perfect temps for running hard. In the initial minutes of the race I could tell it was going to be the day that I had hoped for and I put the hammer down from the start. When I crested the top of the first major climb I was greeted with one of the most amazing views of the sun on the high peaks, and a low cloud layer filling the valley giving the appearance of islands in the sky. I savored the view as I descended towards the mist. I was running alone out front enjoying my time out the miles came and went as I passed the major landmarks of the course including my favorite high mountain lake of all time. I was eagerly greeted by the kids that were helping out at the swift creek aid station who seemed a bit surprised that I had arrived as quick as I did. I didn’t linger as I had the goal of hitting the midway point before the 25k runners started, in hopes of avoiding the congestion of passing them on their way out and then passing them again on my return.
I did make it to the turn around a few minutes before the start, was able to swap my bottles and grab sunglasses faster than a Nascar pit stop thanks to the attentiveness of my wife who is a super crewer. I charged back out of the turn around, noted the time on my watch and rode the adrenaline wave away from all of the people. Jon Allen and I crossed paths about 7 minutes after I left the aid station so I knew I had a bit of a cushion, but I knew I had to keep pushing so he couldn’t reel me in, and so I could stay ahead of the fresh legs of the 25k runners. I was still in the lead as I a passed the swift creek aid station, and was again stoked by the kids who were happy to see me still in first. Just out of the aid station I got caught by super strong ski mountaineering racing champion Pete Swenson. I am convinced that Pete is just legs and lungs and he hammered past, I kept with my plan of constant forward motion and let him go. He was running the 25k so I was still in a good place. I passed my favorite lake and the aid station folks told me I was the first runner back, which meant that Pete must have gotten off course. Suer enough about 10 minutes after the lake Pete caught me again, but this time we ran together for I while. I knew we were getting close to being done so it was time to bury the needle a bit. Pete finally broke me and pulled away at the bottom of the two huge switchbacks that make the climb up balls pass. He got ahead some but not out of sight and just after cresting the hill I was able to start reeling him in on the final descent to the finish. I passed Pete about 3/4 of the way down the hill and try to hammer to stay ahead. I hit the campground still in the lead and about 100 yards from the finish I spotted my 3 year old daughter Brynlee cheering my in. In a split second decision I scooped her up and started carrying her towards the finish, her extra weight made my calfs cramp and freak out with the extra load, but I hunkered down and finished just seconds ahead of Pete. 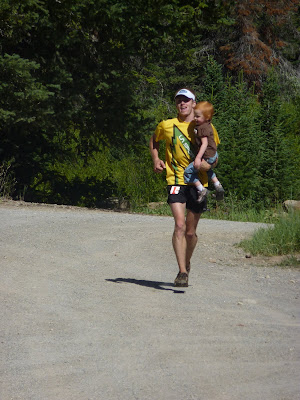 Bryn and I finish the 50k together!
I had the perfect race again at the vaquero. I finished in a time of 5:12:50 taking 11 minutes off of my old course record, I had met the goal of hitting the turn around before the 25k start, got to carry my daughter across the finish, and I was able to spend an amazing weekend in the Salt River Range with my family and close friends. We had friends finish the 25k and the 50k, for some it was the farthest they had run, for others it was a huge challenge just to finish, and finish they did. We spent the rest of the afternoon enjoying Huckleberry sodas and burgers at the finish line, cheering in runners and swapping war stories. It was one of the best weekends of my life!!
My friend Missy posted some great pictures of the race here.
Gear:
La Sportiva Crosslites
Brooks Sherpa short
Green Layer long sleeve and t-shirt La Sportiva kit
Smith Pivlocks
Ultimate Direction hand helds
Kona Kola Nuun
EFS liquid shot
Nuun Headsweats visor