Menan Butte Challenge, Finally Back At It 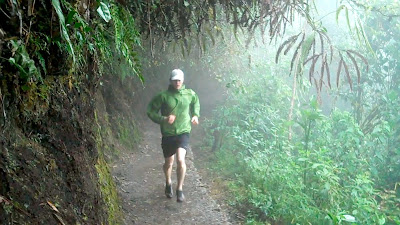 Well it is about time I write something here, the electronic cobwebs were getting pretty thick, not to mention the digital dust bunnies! Yesterday marked my first trail race of the year, the Run Around The Rim which used to be called the Menan Butte Challenge. It has been a couple of months since I wrote anything here, but I have been posting some over on The White Room. Honestly the ski mountaineering race season took a pretty heavy toll on me this year and it has taken a while to come back. Actually I am not sure if I have fully recovered even now.

I have been spending a fair bit of time running trying to switch from skimo fitness to trail racing fitness, which has proved to be fairly difficult. All of the high intensity training on skis left my tendons pretty soft since there wasn’t any “pounding”. As I have spent more time on the trails it shows that although my cardio motor is ready to rock, the legs are not quite ready. I have had to deal with several minor issues that border-lined on injury. 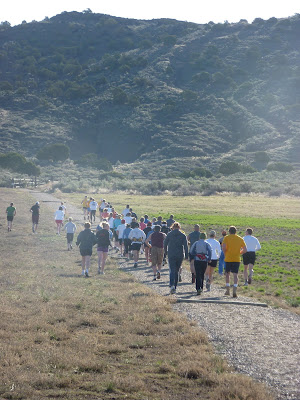 Picture form the start of last year’s race the first climb is a doozy! Photo Tanae Nelson
I was very tentative going into the Menan Race this year. The course favors my strengths as a trail runner and I have always had pretty good results. I showed up for the race a little early and was delighted to see many familiar faces. I even had the chance to warm-up with Chris Lundberg from Jackson, who is always a strong competitor. He mentioned that he was also a bit nervous about how the race would go as he had just gotten back from running Boston a few days prior! In the last minute briefing before the start the race director added a bit more pressure by introducing me and talking about some of the running I had been doing over the last couple of years. 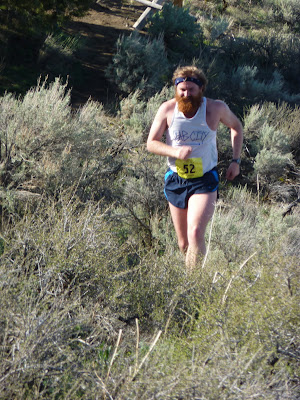 Chris was rocking a beard again this year, but last year’s was more intimidating- Photo Tanae Nelson
I was surprised to have a very lean college aged runner holding on during the entire first ascent. Normally I can get away from the crowd on the way up the Butte, but this guy was stride for stride until nearly the top. Just after the crest I couldn’t hear him anymore and so I put the hammer down trying to gain some ground. It worked since I ran pretty much the rest of the race all alone. On a small out and back I saw Chris and Eric (the lean guy) duking it out on the descent to the turn around, but at that point I had a pretty solid lead. I still pushed hard trying to reel in any runners ahead of me on the shorter course, I did pass a couple on the last descent to the finish line. I crossed the finish line in 42:09 for what was thought to be a 12k, although it felt a bit shorter.
I am very content with how things went in the race, it felt really good to push my body to a hard effort. I hung around for the awards and things then as runners packed up and headed out, I grabbed my Ultraspire Surge and headed back up the Butte to get the long run miles in for the week. Since I had raced hard for 6 of the miles I felt pretty content with an additional 14 on the butte, especially since I totaled out just shy of 6000′ of ascent for the day (1500′ in the race and 4482 after). Final Results Here
Gear for the race:
La Sportiva Crosslite 2.0
Green Layer La Sportiva Race long sleeve
Patagonia Long Haulers
First Endurance EFS (with half a scoop of First Endurance Prerace).
After the race I dropped to a green layer t-shirt and grabbed the UltraSpire Surge, I fueled with 1 EFS liquid shot and plain water.
Hopefully this race was enough of a confidence booster that I can break out of the slump that I have been in for the last month or so, that coupled with some big plans for this summer should give me the motivation to train hard and keep this blog updated with some quality content. If there is anything trail or skimo related that you would like to hear about leave a comment below. I am thinking of doing some gear/nutrition reviews as well as some training info in the near future. 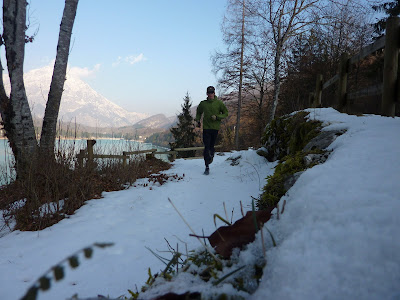