Self Imposed Carnage at Red Hot 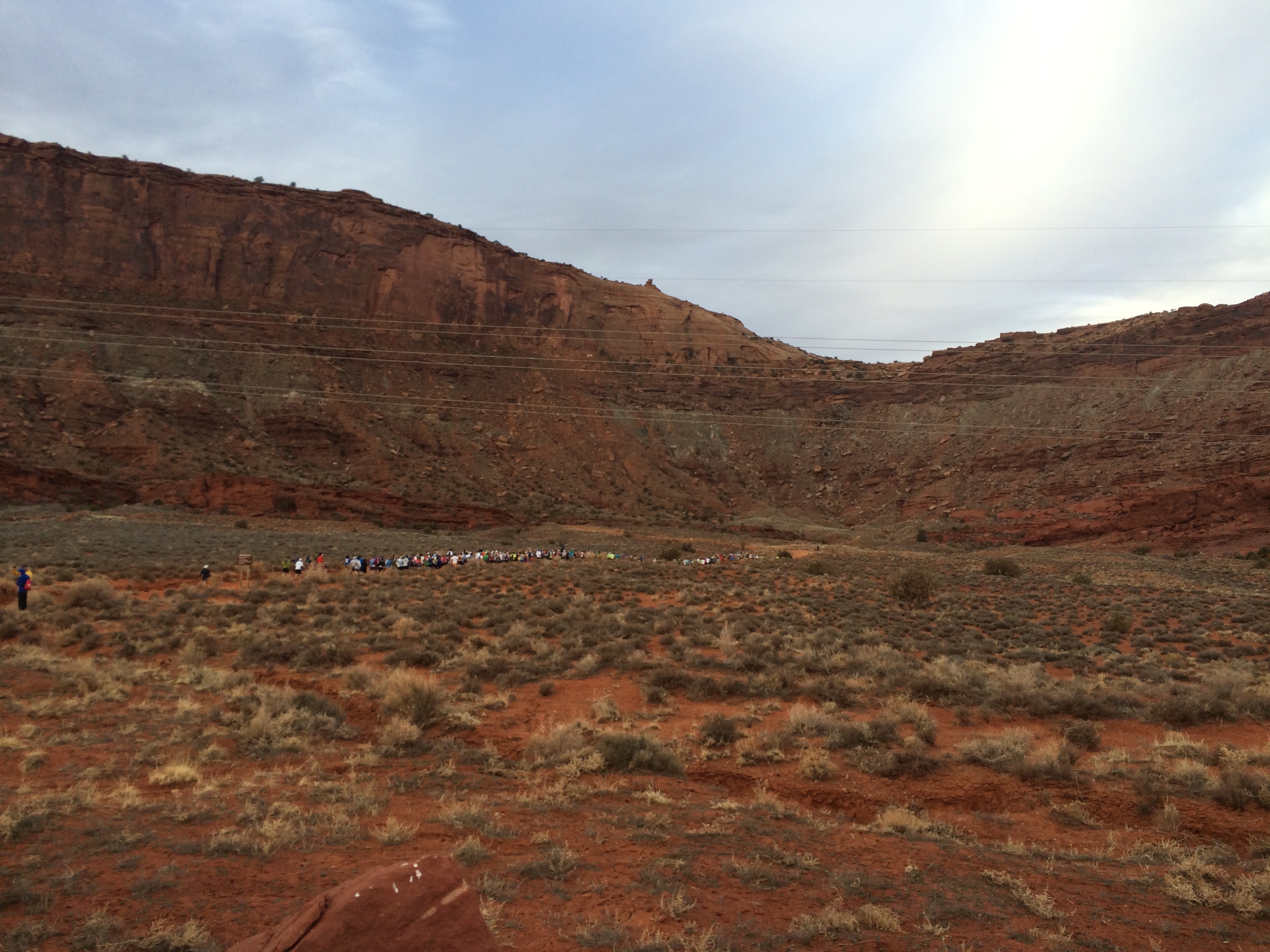 February is great in the desert. Photo Tanae Nelson

It is very alarming how quickly my stride went from quick, smooth, and effortless, to a short, painful, choppy shuffle.  I am just over 20 miles into the race and the reality of running above my fitness for too long is staring me in the face.

After several months of little to no snow in Pocatello and lots more running than skiing, I decided it would be a a good idea to head to Moab for a classic Ultra Season opener, the Red Hot 55k.  I first raced Red Hot 6 years ago as my second ultra.  I remember in that race I started out way too fast and ended up really struggling in the later half of the race.  I’ve told myself many times since that it is better to start out a little slower and not pay for it later.  Most of the time I don’t do a very good job of following my own advice.

Leading up to the race I had a really good base of mileage but very little speed work; actually, no speed work at all. I hadn’t planned on racing early this year, so I have been taking the time to build adventure strength and a base to draw from all summer. Training had been going really well and I felt confident that I would have good, but probably slower run.  Unfortunately (or maybe fortunately) I came down with a nasty bug on Monday and I was forced into a bit more of rest and taper than I had planned on.  So, all things considered, it was tough to predict how things would turn out in the race.

The weather before the start of the race was amazing; cool, but not cold, and about the perfect temperature to run.  Red Hot tends to draw a solid field of runners, and due to it’s early timing, everyone downplays or maybe is unsure of their current fitness.  In the half hour or so before race at check-in, everyone I talked to seemed super stoked, and they also immediately downplayed fitness and how they expected the day would turn out. When the countdown hit zero and the race started, it was immediately evident that a lot of people had not been completely honest about pre-race prep.  A group of 8 or so almost immediately formed and pulled from the rest of the field.  The pace was hot, red hot.  There were many amazing runners in that front group.  I thought to myself, “see how long you can hang on without really suffering”, and so that’s what I did.  We quickly moved through the first miles of the course, it felt great to feel my legs floating along, my heart pounding, and my lungs pumping.  I knew the pace was too fast.  I knew I would pay later. I knew it would get ugly, but I kept pushing with the group.

I was amazed at how well the group was staying together at such a brisk pace.  It took the first steep climb, just after four miles, to pull the group apart a little.  A few re-grouped at the top of the hill but I let myself get spit off, (OK, I couldn’t hang on anymore). I continued to push pretty hard, all while the gap between me and the front got larger and larger.  I hit the first aid station and for the first time I glanced at my watch.  34:20.  In the same moment I was ecstatic and terrified.  Ecstatic because I just broke my 10k PR; terrified for the same reason. I was on a fool’s errand, yet I kept running with reckless abandon.  Slowly I was already coming unraveled, until Mike Foote caught me. We commented on the pace, and how quick we were going. I promptly latched on to Mike to see if I could keep moving fast a little longer.  The distraction of Mike’s company worked.  We kept clicking off relatively quick miles.  Upon arrival at the second aid station, mile 13, another glance at my watch revealed another PR, 1:24:13.  Mike stopped to fill a bottle and I enjoyed being able to slow a little until he caught back up, pulling me in his wake.  Many times it was mentioned that we were probably still running too fast, yet we both pushed on.  (Later Mike would comment that he felt we were running together; I felt like he was certainly doing the pulling.)

I managed to keep with Mike for another four or so miles before he started to pull away.  Not long after Mike pulled ahead the course started working upwards and I fell apart.  It was time to pay the piper.  It should be made clear at this point that I do not consider myself a “fast” runner.  I have very little experience with running on a track or road. I haven’t raced the mile since junior high and I had just wrapped up about 20 miles of, for me, hauling ass.  In an instant my pace went from run to crawl.  My quads started hurting, deep painful hurting, on the uphill. I am trying to block out how the remaining 14 miles physically felt.  The ironic part, at least to me, is that I was still having fun.  My stride was short and choppy, each step felt like searing hot irons in my quads, my feet started to hurt from an awkward gait, and my grin continued to grow.  I had withdrawn more than I had in the bank, and now I was paying the debt.  I tried to pass encouragement on to the 33k runners that I caught, and congratulated the 55k runners that passed me for running smart.  I managed to force my body to run (if you can still call what I was doing at that point a run) almost every step of the way.

I happened to catch Joe Grant, who had been in the lead group early in the day, but he was suffering from the stomach issues, about 100 yards from the finish.  He had vomited several times, which slowed his pace, and it seemed fitting to run across the finish with a good friend who, like me (although not from his own stupidity), was not having the day he had hoped for.

The rest of the afternoon was spent hanging around the finish catching up with friends, swapping stories of our highs and lows on the trail, and enjoying a beautiful sunny day in the desert.

Hindsight is 20×20, maybe this time I will learn. Photo Tanae Nelson

Addendum: It’s now Sunday night.  I can barely walk.  My quads are destroyed.  I guess trying to get a 10k and half marathon PR is not a very smart way to race a 55k.  Here’s to getting some leg speed this spring!! (as soon as I recover enough to run or even walk).