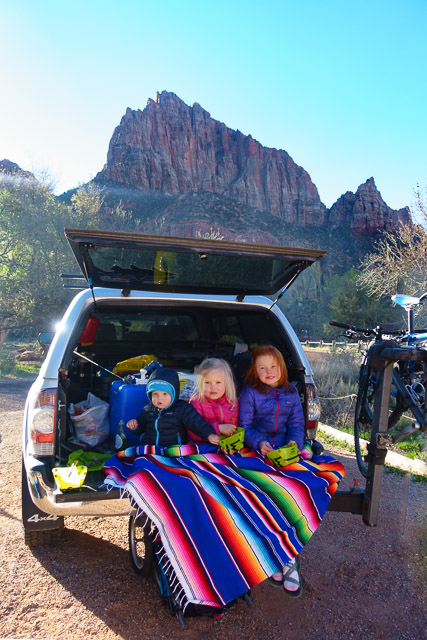 I finished an amazing run up to Angel’s Landing to be greeted by three kids on a tail gate eating oatmeal. Normally, they would still be sleeping, but today they were excited to get on to the next leg of the journey. They work early and started packing so that we could meet up with Roch and Catherine for some time off the beaten path.

We struck camp, got loaded up and then walked over the the visitor center from our campsite to check of the girls’ Junior Ranger badges. Ever since the very first visit to the park with them several years ago this has been a requisite. There was a mass of humanity around the visitor center and lines for everything, except the Junior Ranger desk, which was a relief. Before long we were loaded in the truck headed up Grafton Mesa to find our compatriots. We had brought the truck to make it possible to take the road less traveled, and although the road to Grafton sees plenty of traffic, it takes a high clearance rig to get up the road. We bounced our way to the top and had no trouble finding the turnoff where we would meet our crew. After setting up camp again there was time for lots of short hikes, trail runs, exploring, and even an hour long jam session with Chloe and Roch headlining the event.  Brynlee and I went out for about an hour long run, at her request. Brynlee getting her trail run on.

It was super rad to see her psyched on using her own two feet to see this part of the world. Great food was the theme of the evening and once again early to bed, weary from the days adventures.

Par for the trip, I was up before the sun getting my run in. I ran off the mesa down to Rockville and then managed to work my way back to camp linking up mountain bike trails that fortunately went where I imagined they would. Back at camp, a quick breakfast and then once again packing up to and heading to what I expected to be the best part of our trip, the Grand Canyon. Chasing the Synchro through the desert.

There are lots of places to visit the Grand Canyon. In this case, we were relying on the guidance of Roch and Catherine and headed to Toroweep. Again, the truck came in handy with 60+ miles of dirt road, including some pretty rowdy low speed 4×4 driving. We followed Roch in his Synchro, and after a couple hours of driving we were literally on the edge of the canyon. Roch showing the girls the rafts working their way through Lava Falls.

It would do it a disservice to try to explain what it was like for the family to see the Grand Canyon for the first time in this remote, relatively untouched section of the canyon. We spent time getting history lessons on the canyon and the river from Roch, about the geology and landscape from Catherine, and allowing the kids to simply roam in a wild place. The next morning Roch and I trotted out of came well before daylight, and made our way towards one of the few places you can penetrate the rim and descend to the river. We worked out way down through geologic time and as the sun kissed the upper canyon walls, we reached the river. It was incredible for me to be sitting on the scouting rock for Lava Falls, with Roch, who knows so much about the canyon and it’s river history. We spent 45 minutes discussing the route through the rapid, how it changes at different flows, and hoping there would be an early party headed down the river. Unfortunately none came, so after ceremoniously dipping in the river we began the ascent towards the sun, the rim, and out camp beyond. Keep in mind a trip the the river is serious business. The wild bunch, wrangled together only once for a quick picture.

A couple hours after we had said we would return, we trotted back into camp, and once again began to break camp. My heart was full of melancholy as we packed the tent and stove, this would be the last time we would strike camp for our spring break adventure. We had experienced so many amazing places and things, the kids were hitting stride with being outside, dirty and a little feral, and I was sad to see the trip coming to an end. Family photo on the rim of THE canyon. An image that will long be favored.

We parted ways with Roch and Catherine, and headed to St. George to visit our the Thatchers and spend a couple days in St. George before heading home. It was strange to be in the hubbub of the city after camping for the last week, and both Tanae and I almost immediately longed to be back in the solitude of the Canyon, the Mesa, or  simply the wild desert. We would have gone, but we couldn’t pry the kids off of the trampoline our out of the pool. We embraced the moment and joined them.

Another pre-sun departure found me on an adventure in the Sand Hollow/Sand Mountain area knocking out one last long run to put the finishing touches on a 120 mile training week. As I got back to the house I was relieved to not have to pack a camp and drive, we played the rest of the day away and the next morning made the long trip home. One final note, 10 days of adventure in the desert and the Yeti still had ice!