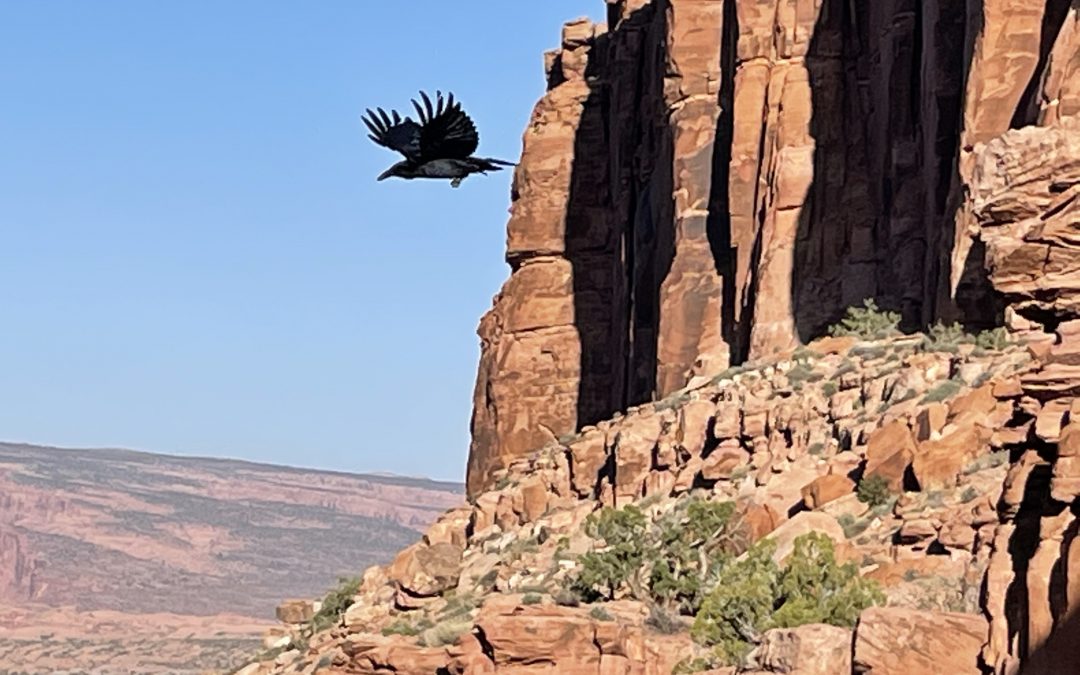 I pulled myself over the rocky crest, and crumpled on to a rocky outcropping, tears filling my eyes. It was a raw, desperate moment. It had been building for months, maybe even years, and now it was here. I could no longer push it in the corner or hide it under the rug. It was overwhelming. I still find it difficult to accurately describe what had caused it all to happen, but regardless, it did. It was not a singular thing, rather the summation of all things in life that had become too much. I no longer felt capable of carrying it and there, in that moment, I broke. Emotion poured out of me, tears transformed to sobs, a full body release. Very much the usual on long runs, I was alone. No one to witness the emotional breakdown, no need to hide it out of shame or embarrassment for not being strong enough. Just me. Well just me, and the Raven.

I did not see or hear the Raven arrive; maybe I arrived to it. Either way there it was, only a few feet away, on the end of long, dead branch of a tree. The branch ended just below me, putting the Raven at nearly eye level as I slumped on the ledge. It observed me with what seemed concerned curiosity, head tipping from side to side, turning periodically. It did not fly away. It stayed. As the emotional wave crashed and then began to ebb, the Raven stayed.

I’m not sure how long I sat there, but it seemed like a very long time. The Raven stayed. I remained the focus of it’s attention. After some time I spoke to the Raven. I simply said, “thank you for staying”. It did not speak back, but again cocked it’s head to the side. I pulled a GU out of my pack, knowing I would have to soon get up and resume running. I had been out for several hours and had many miles yet to run. I needed to get back to my family, and to the weight of work and life that demanded my attention. As I shifted to stand, the Raven called out, three short bursts, “caw, caw, caw” and it flapped it’s wings, but did not take off. A distant single “caw” came from over my shoulder, and a moment later a dozen or so Ravens crested the ridge and began flying around me and the Raven. Tears again filled my eyes.

I struggle to find words that accurately describe the moment. It seemed as though this immense burden, the one that had crushed me in to a sobbing mess on a nameless rocky outcropping, the one that wasn’t one thing but rather all the things, was being lifted, shared by the Ravens that swooped around me. Outwardly nothing had changed, but inward I started to feel different, knowing the sum of responsibility had not changed, but that somehow it felt lighter. I felt the lift of the Raven.

I rose. The Ravens continued their flight, swooping, diving, climbing and gliding all around me on the ridge. The lightness of their movement lifted my mood and somehow lightened the weight. I again thanked them, and resumed my run. They stayed near me until I left the ridge a few miles later and descended the final miles in to the forest back to my van.

As a young man, I heard or read that the Raven symbolized those that had passed on the mountains, friends gone too soon. I’m not totally sure what the source was, but I have always held to that belief. It allowed me to remember people that were important to me and those that inspired me. That singular moment, on the ledge, deepened my relationship to the Raven. The Raven, more than the memory of those passed, became a friend, a confidante, a symbol of caring, community and unwavering support.

That moment, was only the beginning. For the year that followed, every single time I was out in the mountains I encountered the Raven. Maybe I had not paid attention before, but now I was, and it was nothing short of amazing. I am in the mountains a lot, nearly every day and sometimes multiple times in a day. Early mornings, late nights, hiking, climbing, paddle boarding, biking, and, of course, running, the Raven was there. At home and during travels, both domestic and international, the Raven was there. It was a comfort, it brought a smile and a warmth. The Raven was there.

I have a tendency to just take on everything that comes my way, and to rely on myself to accomplish whatever needs to be done. When it gets difficult, or I get overwhelmed, I withdraw and those tendencies compound. This behavior becomes a downward spiral of isolation and anxiety, taking on too much and trying to do it alone. The moment on the ridge, and the year that followed, the Raven taught me the importance of community. It taught me the importance of having someone to lean on, to depend on, someone to be there. It showed me a need for connection I had not fully appreciated. A skeptic may say that it was all coincidence, a religious would say a sign, and frankly it doesn’t matter. It was what I needed. A teacher, a companion, a reminder.

I have been working at being better at sharing my challenges, learning to say no, and being willing to accept help from others. I have also been trying to be better at reaching out for help, for guidance, for adventure, and to be present for others. I still have a long ways to go, and often stumble. It has been three years since the moment on the ledge. I am still learning from the Raven. The Raven is still here. I see it most days, always on days that I am struggling, but also on days that I am not. I am grateful for the Raven.